I had my mother over today to celebrate her 69th birthday. I had planned to do a roast beef dinner. With hindsight temperatures of 26C plus here in Bromley meant that a meal involving three ovens was probably not a good idea...

However, that is what I had decided so that is what I did.  I roasted the topside beef joint at 80C for 7 1/2 hours.  I then took it out, turned the oven up to 250C and put it back in for about 10 minutes to crisp the outside.  It produced a lovely, moist, perfectly medium rare roast.  The advantage of taking it out to turn the oven up was also that I managed to scrap the pan of all the yummy bits to make a great gravy whilst the beef finished off.

We served it with fresh plain pink fir apple potatoes from the garden and Petit Pois à La Française (practising for our dinners next weekend!).  I also had gluten free stuffing and bacon wrapped sausages courtesy of a trip to Marks & Spencers earlier in the day.

Anyway, the title of this post refers to the fact that I needed to make a dessert for the meal.  I figured that we needed something light - and something cold!

However when old Mother Hubbard went to the cupboard/fridge she found she didn't have any cream.

What I did have was a large number of seriously over ripe bananas.

I don't like bananas.  I will tolerate them if they are very ripe and I have nothing else to eat and I am very hungry.  I detest banana-flavoured things.  I definitely don't like banana ice cream.

You know where this is going, don't you?

I also don't like peanut butter.  I don't actually like peanuts.  I will eat dry roasted peanuts. Actually I eat the stuff left at the bottom of the packet.  Mind you, they probably aren't gluten free and I certainly haven't eaten any for years.

Sainsbury's have recently started stocking Peanut Butter & Co's range of peanut butter products.  This was a great discovery as they are actually labelled as being gluten free.  It means I can make tiger butter *sigh* which is not such a great discovery for my waistline...

So, with just three ingredients, I decided to make a no-cream ice cream.  If you have a dairy free chocolate spread, then this is a vegan ice cream. 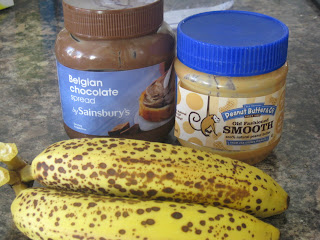 This can hardly be called a recipe!

Put all the ingredients into a bowl.  Grab your stick blender.  Blend. 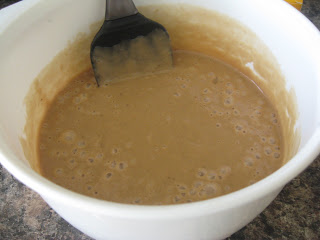 Taste and adjust to your preference.  If like me you have an unadulterated peanut butter then you may want to add a pinch of salt, or a tablespoon of icing sugar.  Weirdly, despite the fact that ice cream mixtures usually lose sweetness as they freeze this mixture came out sweeter than it did at room temperature so be wary of making it too sweet.

Tip the mixture into your ice cream maker and churn. 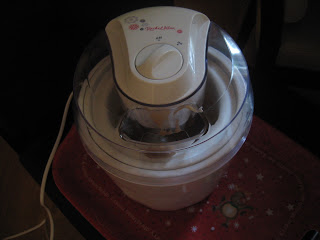 Due to the heat of the kitchen I stood mine in the (relatively) cool dining room.  The lead didn't reach from the table which is why this picture is of the ice cream maker on a (Christmas!) tray on one of my dining room chairs.  The mixture took about 20 minutes to reach soft whip stage. 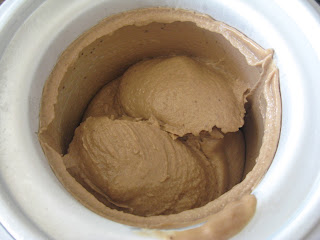 I could have put it on for another 20 minutes but I put it straight into the freezer instead.

We served it up a few hours later and everyone agreed it was successful.  As my bananas were very ripe the ice cream was more banana flavoured than peanut butter flavour but as I know that now, I can adjust it to taste in the future.

Before I put the mixture into the freezer I blobbed more chocolate spread over the top and swirled it through with a knife.  This gave a lovely ripple effect when it was scooped out.

This is a great, stand by, store cupboard ice cream.  You could serve it barely half an hour after starting to make it if you need a dessert in a hurry. It was gluten free, egg free, and could easily have been made dairy free with a dairy free chocolate spread or simply melted chocolate.