Saturday saw our Garden Party, held to raise money for Coeliac UK in memory of my Dad. 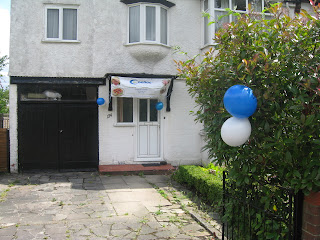 The forecast was for showers - possibly heavy - so we decided not to set up the gazebo and instead took up the kind offer of the use of the house at the venue.

Coeliac UK had sent us a banner and balloons which ensured that our guests knew they had arrived at the right place!

Guests started arriving from 1pm.  Fortunately most of them were inside before the thunderstorm broke overhead!  Gusting winds took care of some of the balloons, the banner came down, and some guests had to shelter in their car waiting for it to ease before they risked the dash to the house!

After the storm the sun shone, we repaired the banner, and the children all took advantage of the garden to let off some steam. 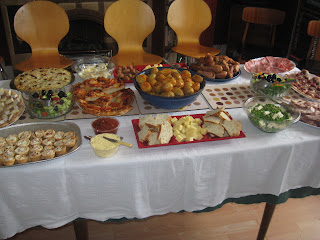 The table was ladened with a mixture of my own home made gluten free food and items donated by companies for the event.  Pizza bases from Glutafin and Wellfoods were topped with either a vegetarian or meat topping and we brought more out as soon as they were eaten up!  My bacon jam proved to be a hit, served on Glutafin mini crackers topped with a piece of ripe brie.

That morning we'd made a fresh loaf of mixed seed bread using a mix from Foodamentalists.  We also used Dietary Specials' pastry (from their frozen range) to prepare mini cream cheese and bacon bites. 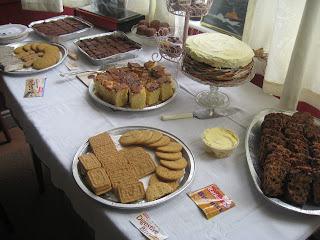 The "sweet" table ended up very full - this picture was taken before it got fully covered!  As well as products from BARKAT, a friend had provided some decadent chocolate brownies together with a very rich sauce and a fruit bread based on an Irish recipe.


Sarah from Especially Delicious brought some gorgeous cupcakes (not pictured) which manage to amaze the non-gluten free guests at the event who couldn't believe they were "free from"!


In fact several guests commented on the selection and taste of the food on offer and expressed surprise that it taste as good, if not better, than "normal" food!  I think we may even have converted one person!

The companies sponsoring our prize draw had provided a wealth of information about their product ranges, and how to get items on prescription.  This was very useful for those at the event who were gluten free - including some newly diagnosed coeliacs. 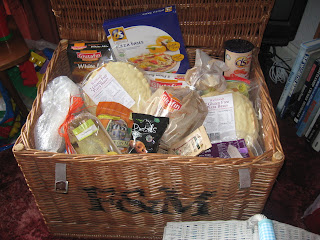 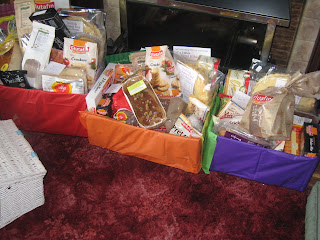 Guests also enjoyed some dreamy ice cream, donated by Taywell - honeycomb, vanilla, chocolate, raspberry ripple or pistachio flavours were on offer and the general consensus was that they all tasted amazing!

Many of the guests went home with doggy bags (well, plates!) stuffed with various savouries and desserts and they definitely all went home full.

As a result of the Party a cheque for £150 is being posted to Coeliac UK to add to the £195 raised online via Just Giving.

Annie would like to thank all the companies that supported her efforts - this was all done in memory of her Dad who died from cancer caused exclusively by coeliac disease that was not diagnosed until it was too late.  The day was tinged with sadness but it was a fitting tribute to an amazing man.